We Care About Roosters 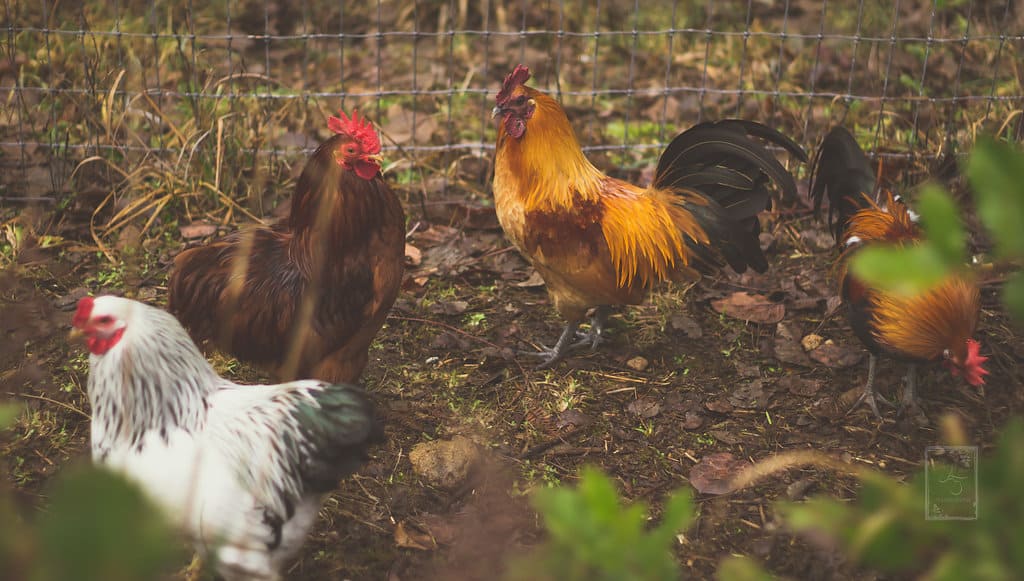 Dawn at all Hours

Chickens, especially roosters, are undeniably the most often discarded farm animal. If you are vegan, you likely already know that male chicks are killed soon after hatching. On average, half of all chicks are male. They don’t lay eggs, and they crow. When we tell people that we share our life with 45 – and sometimes more – roosters, the information is often shared with chagrin. “How are you able to get any sleep?” The truth is that unless you have a rooster sleeping inside your house, they will most likely not wake you up. There are many ways to dampen the sound including insulation and a dark coop.

Our first rescued rooster, Porter, was seized in a cockfighting bust along with dozens of others. Cockfighting roosters are the pitbulls of chickens. Difficult to adopt and often in need of rehabilitation in order to get along with their own kind. Some will never be able to get along with another chicken. Often they are completely docile with humans and absolutely love attention and affection.

Porter loves having his face rubbed. He closes his eyes and practically purrs in your arms. He also loves to be in the center of a circle of humans standing around him and admiring him. After seven months of rehabilitation, Porter is finally reaping the benefits. The other day he snuck out and managed to not get into any fights even with other roosters freely roaming with him. In fact, we found him hanging out in the corner with the small bantam pack. Amazing!

The rest of the Heartwood Haven roosters range from teeny tiny to humongous. They came from shelters, were caught as strays in parking lots, freeways or parks, and some were even school hatching projects. Despite the desperate situations that led to their rescue, sanctuary life is the best outcome for these intelligent, social birds.

Certain breeds of roosters get raised for meat, but more often than not they are treated as unwanted bi-products to be discarded. Even in the backyard chicken and egg industry, male chicks are killed; it’s not just an industrial farm practice. When not immediately killed, male chicks are used as shipping peanuts or warmers. Once they start to crow, they are often given away for free on Craigslist, which is not safe and often leads to dumping and surrendering at shelters. If roosters are surrendered to shelters, they are at risk of euthanasia. Rarely, if ever, is there someone who raises chickens and keeps all the roosters.

We have heard from people who are threatened with heavy fines for having a rooster and must rehome him. Cities are unknowingly creating this problem by allowing backyard hens, but not allowing roosters. One of the ways that cities can help alleviate the problem of homeless roosters is by allowing roosters in the same municipalities as hens.

Given all the ways roosters can arrive in need of rescue, it is no wonder that we, and every other sanctuary, get frequent requests to take in roosters: a single ‘oops’ rooster, five roosters, and sometimes even more. It is difficult for sanctuaries to keep up with the constant demand for placement of roosters. Many sanctuaries might not be aware that roosters coexist peacefully in bachelor flocks. We want to serve as an example to rescues and individuals that it is possible. We hope to inspire and educate.

We are not the only sanctuary trying our best to help roosters and hens. Adopt a Bird Network is a great organization to learn about, especially if you are located away from Seattle, across the United States. Through their mission, they are dedicated to positively impacting the lives of backyard chicken, duck, and other domesticated birds in need across the United States. Visit the Adopt a Bird Network website to learn more about their efforts toward finding each bird a forever, no-kill, loving home.