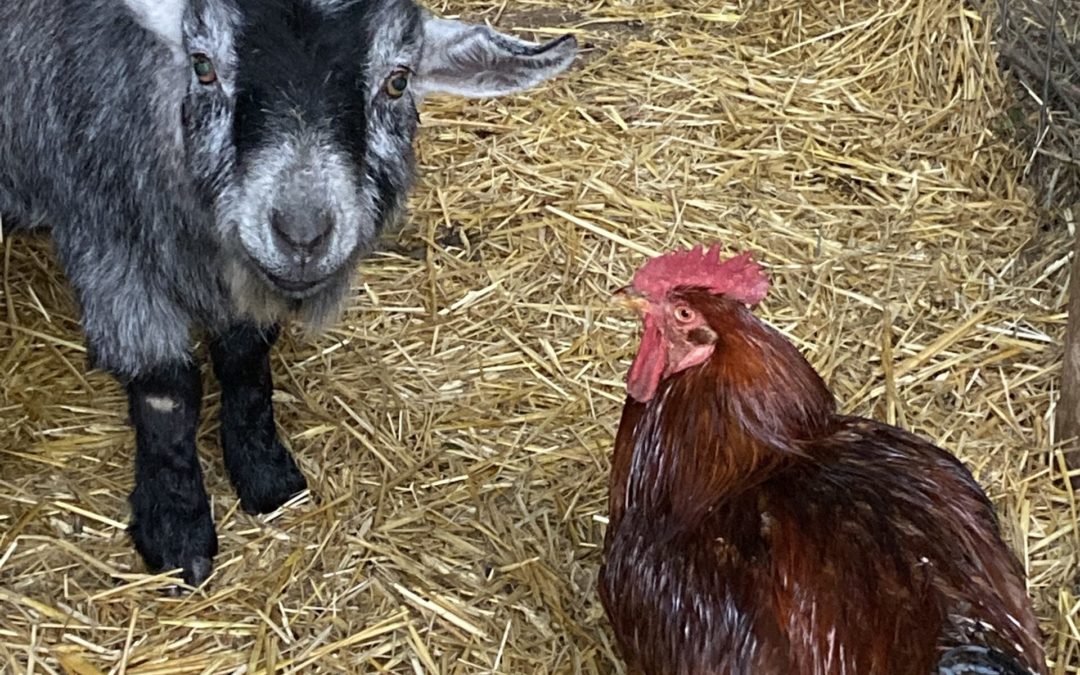 We are continuously inundated with bad news, and for those of us invested in the welfare of all animals, there is no exception: the horrors of factory farming, animal abuse, deforestation and habitat destruction, the effects of climate change on wild animal species and constantly on our radars. Instagram, its algorithm calculating my penchant for animal causes, fills my feed daily with homeless dogs and starving polar bears, ruining my day with visual proof of their plight. However, we rarely hear about the success stories- the animals that made it to the other side.

Although the tough hands-on, political, and financial work is crucial– I would never advocate for casting suffering animals out of sight, out of mind– sometimes we need to experience a positive outcome. Progress begets further progress, and we need to know that our efforts are leading to solutions. This December, after feeling increasingly despondent about the state of both the environment and the animals in it (two issues that are more inextricably linked than previously appreciated), I decided I needed to visit some happy animals. After-all, the reason that I advocate for animals in the first place is because I love them! Although I’ve been dog-obsessed since I can remember, and vegetarian for the last decade, I’d recently become increasingly invested in the plight of farm animals. After some quick googling of Washington animal sanctuaries and two weeks later on a wet Saturday found myself headed out to pet some pigs.

While some larger sanctuaries are impressive for their breadth of personnel, acreage, and financial support, Heartwood Haven is admirable for the opposite: it’s run almost entirely by just two people, in their own backyard. Although Heartwood Haven is a registered nonprofit with a board of directors, funding from donations, and a rotating cast of volunteers, Kate and Hope, who live at the sanctuary, founded the organization and manage the organization as the animals’ primary caretakers. More accurately, the sanctuary lives at Kate and Hope’s home. This all was a bit of an accident. As I toured Heartwood Haven with Kate, she explained their origins: after purchasing a home and several acres in Gig Harbor, they heard about cockfighting bust with many rooster who would face euthanasia if not rescued, they adopted their first rooster named Porter. That was in 2017; they now house seven pigs, two goats, a family of turkeys, dozens of ex-egg-laying hens, former cock fighting rooster 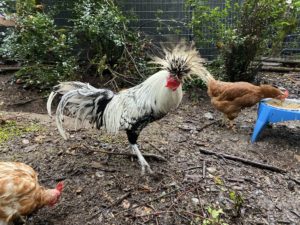 s and their mates, ducks, two dogs, and two cats. Three of the pigs are over 500 pounds; two of the others have special needs. All of the animals have cozy, hay-filled barns or coops, huge areas to roam, and an entire shed full of snacks: vegetables, fruits, pumpkins. All of these structures Kate and Hope built as their backyard turned into a refuge for abused and neglected birds and livestock, an impressive accomplishment, especially considering the sanctuary has existed for only three years. Kate and Hope aren’t satisfied yet, however, and said they are always planning and saving to expand the sanctuary boundaries, increasing their capacity for more and larger rescue animals.

While we toured the grounds, I asked Kate how they deal with what I imagine to be the toughest part of the job: coping with the thought that countless other animals need rescuing and turning down new animals that are in dire situations. Kate confirmed that they receive daily requests to take in all types of animals, and although it’s heartbreaking to decline any animal in need, they must abide by the simple principle that they will never take in more animals if that will lead to a decreased quality of life for their existing residents. Although a harsh reality, I think this metric is an incredibly important guideline, and a reminder of why I came to visit in the first place: you can never save them all, but you can give the few you can the best life possible, and your energy must focus there.

Kate introduced me to each animal and explained their personalities and inevitably their often-horrific pasts. These backstories evoked the familiar despair that surrounds any story of animal abuse or neglect: the hens, formerly disposable egg-layers, have blunted beaks that were cut off to prevent pecking in their unnaturally close and stressful conditions on factory farms; Milo the goat was bought as a present for a child and promptly discarded. Likewise, Lucy and Ethel, the giant pigs, were abandoned, left to starve and without water. Usually these stories would haunt me, literally keep me awake at night, but while bleak, my emotions quickly bounced back to positive. I was able to meet and pet the animals in real life, see the joy in their eyes and love for their caretakers, and if not forget their sad stories, acknowledge that they are no longer there. For Fiona and Penelope, the ghosts of 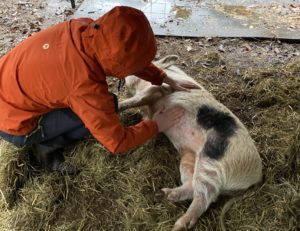 their past are harder to ignore: both have injuries due to neglect and abuse that have left them with chronic health problems, including the inability to walk properly. However, even these two sweet girls, who have and continue to endure so much, squealed with joy at receiving an apple treat and getting a belly rub from Kate. While walking we were followed by Mila and Shadow, Hope and Kate’s rescued dogs, who played together and paused for attention, completely unfazed by the five massive pigs on the other side of a metal fence. Although full of energy, Mila and Shadow were both senior dogs at the time of their adoptions, finally finding a happy home for the later stages of their lives.

Although these animals can never fully disconnect from their pasts, there is peace in knowing that they, at least now, are happy. While it’s easy to identify with dogs or animals whose behaviors are more similar to our own, some might not assume that farm animals have strong, independent personalities as well. Josie, a beautifully colored and sprightly young (yet huge) pig, whose hilarious antics often dominate the Heartwood Haven Instagram feed, scratched her back gleefully 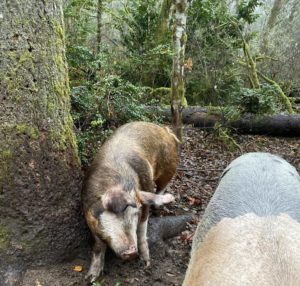 on a tree in front of us, putting on a show for her new spectator. Lucy and Ethel, when given a special treat of melons, grunted, squealed with delight, grabbed their snacks whole and bolted in different directions for the woods to eat. Milo, a sweet and friendly white goat, casually nibbled on my zipper while enjoying neck scratches while Jack, a shyer pygmy goat, nuzzled his Robin, a red rooster who lives in the same enclosure. And while it can be harder to imagine personalities in birds—who are highly evolutionarily distinct from humans and therefore unlike us in most ways—Marian, a plump, food-obsessed white hen will show you otherwise. After devouring an apple out of Kate’s hand, she watched us with intense curiosity, sprinting the length of her enclosure to match our steps on the other side of the fence. Adding endearing charm, she’s unlikely friends with Penelope and Fiona, and besides stealing their food, the three happily share a home.

In addition to the residents themselves, I also learned about the behind-the-scenes work that keeps Heartwood Haven functioning. It was clear that Heartwood Haven works continuously and arduously just to maintain daily needs. However, much more planning and attention is necessary for fundraising, outreach, and managing the health of many disparate animal species. As an infectious disease scientist, I was curious about how they find veterinarians who specialize in each type of animal. Kate, who volunteers full time for the sanctuary, has experience as a veterinary assistant and is knowledgeable in not only every species-specific needs but also where to find those treatments. She explained that they have a rotation of specialized vets on standby, but that pigs are the most challenging to treat medically, as not many vets in the area have porcine expertise. Likewise, because the pigs are so large, they’re difficult to transport to those who do. For example, to be spayed, the large pigs had to travel in a horse trailer all the way to Oregon State University.  Additionally, Fiona and Penelope, who both have difficulty walking, had to travel to early morning appointments to receive specialized treatments for their conditions. As Heartwood Haven hilarious quipped on an Instagram post about their appointments, it’s not easy to wake up a pig before sunrise. However, they somehow managed to get the girls up, just one example of how far, figuratively and literally, Kate and Hope will go to give their animals the life they deserve. It’s nice to be reminded that while many people are indifferent or at least ignorant to animal suffering, there are always those who care very, very much.

Sometimes, we just need to hear the feel-good stories. 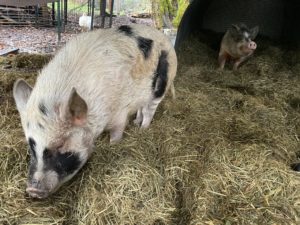 Or better yet, pet them. Heartwood Haven can’t erase their animals’ backstories, but they do give us motivation to fight for other currently neglected or abused animals in the hopes of matching all animals’ lives to the quality at the sanctuary. If you’re feeling the weight of the bad in the world, are curious about animal rescue efforts and how to help, wish to directly support a great organization that is saving animals, or just want to spend a few hours with cute animals, consider signing up for a tour of Heartwood Haven to see these happy animals living a second life. You can also donate directly, set up a recurring contribution, purchase pig-themed merchandise from the shop, or gift needed items from the Heartwood Haven wishlist. The animals’ resulting joy is all you’ll need as a thank you.