The Board of Directors works hard behind the scenes without a lot of public credit to make sure the sanctuary runs smoothly. It takes countless hours of work, late nights, blistered hands and muddied clothes to be where we are now. 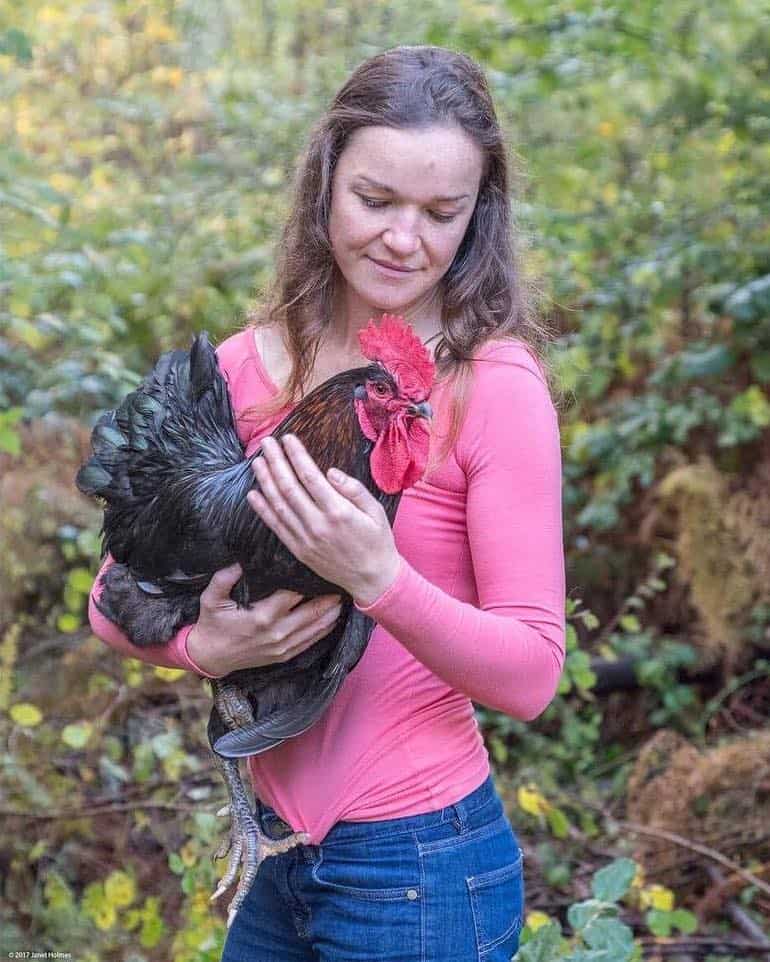 Katya grew up in what is now the defunct USSR. Her earliest memories are visiting her great grandmother in the village and getting chased by geese through poison ivy. She probably deserved that. She saved her school lunches to feed pregnant and nursing stray dogs and tried to adopt stray kittens.

Katya’s family moved to San Diego, CA in 1996. She grew up with dogs, many of them were rescued. Some of the beginning motivations to be vegan were seeing a display on vivisection in middle school. Some students were showcasing their project on what happens to beagles, rabbits, rats and monkeys to test beauty and cleaning products as well as laboratory research.

In high school, she got involved with an animal rights club; eventually watching Peta’s undercover video “Meet Your Meat” she went vegan overnight. She worked in the veterinary field for six years. Currently, Katya spends all her free time working on activism including building up the sanctuary and doing vegan outreach. 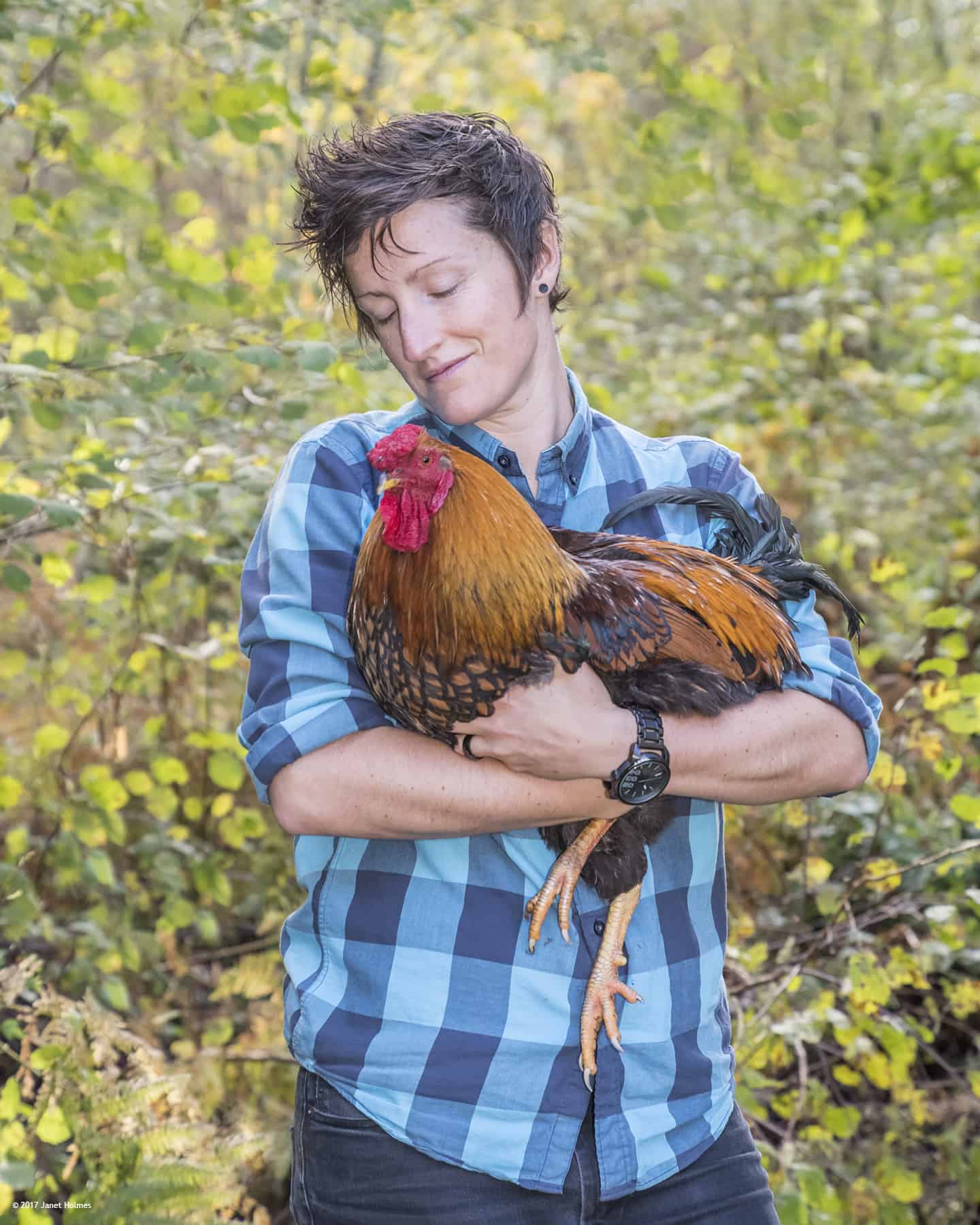 Hope went vegan in March of 2015 a few shorts months after meeting Katya. At first, Hope’s reasons were mostly health and environment related but after about a year of eating a vegan diet her compassionate side started to show through. The idea to start the Sanctuary was initiated by Katya by after a month Hope found a funky looking rooster on Seattle Animal Shelters website and she urged Katya to let them adopt him. That funky looking rooster would eventually become affectionately known as Jon Snow. Jon has taught Hope a lot and Hope gives Jon a lot of credit for turning her into the animals rights advocate that she is today. 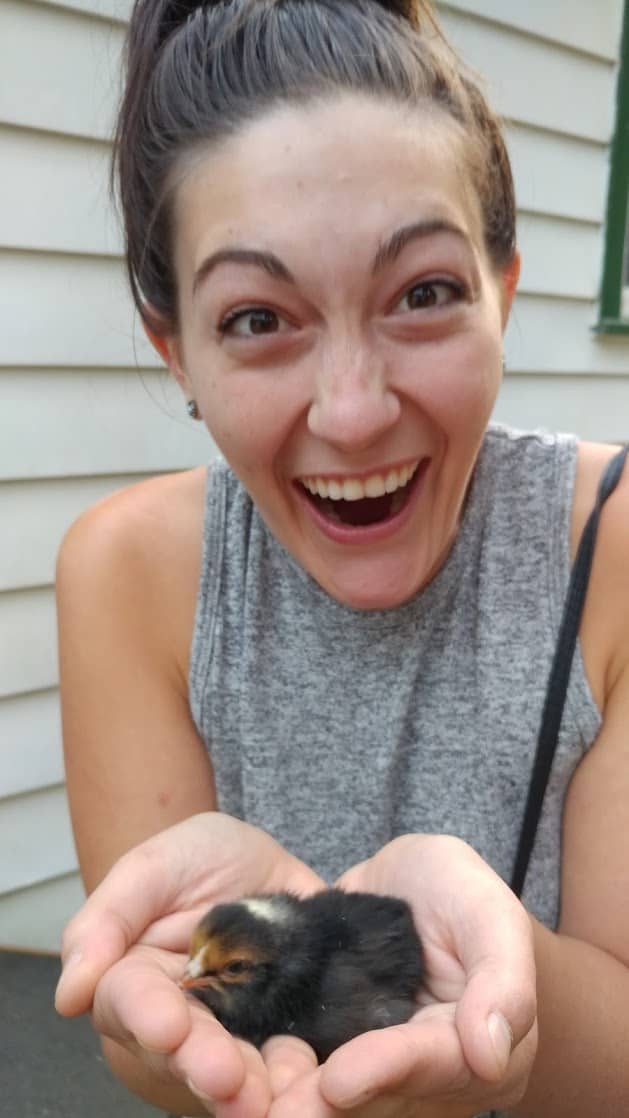 Jamie is a new transplant to Washington, having moved from New York in August of ‘16. Growing up, Jamie always had a houseful of animals which quickly developed her love for all living creatures. She became a vegetarian in middle school and would attend local PETA protests.

Her passion for protecting and fighting for the voiceless was reignited this summer after holding a chick that was only a few hours old. Jamie and her fiancé both went fully vegan in August after watching the documentary ‘What the Heath’. Being new to the Vegan world, Jamie was hoping to make connections with like-minded, compassionate individuals and crossed paths with Hope, Katya and the Enchanted Forest Sanctuary. 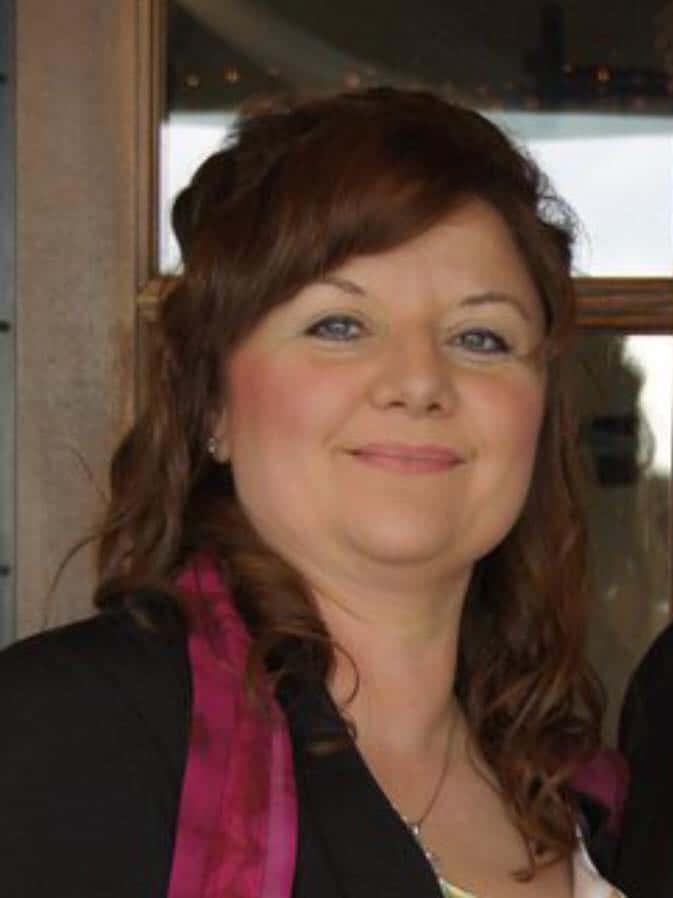 I don’t know the exact date when I became vegan, I just know it has been a little over five years now. I made the decision after watching videos showing what terrible things we as humans do to our fellow earthlings. I felt that I would no longer contribute to their suffering. They are the innocent and need our help. I became vegetarian for a minute and then quickly went vegan. After soul searching, I found that being “a vegan” was just not enough. Activism and service had to be my next step.

After researching a few of the sanctuaries in the Seattle area, I decided upon supporting Heartwood Haven. Hope & Katya spend all of their time with the animals under their care to know each them, their personalities and their needs. They also have a mutual respect with other sanctuaries in the area and are always willing to offer a helping hand when asked.

I’m proud to have been offered an opportunity to serve on Heartwood Haven’s board. 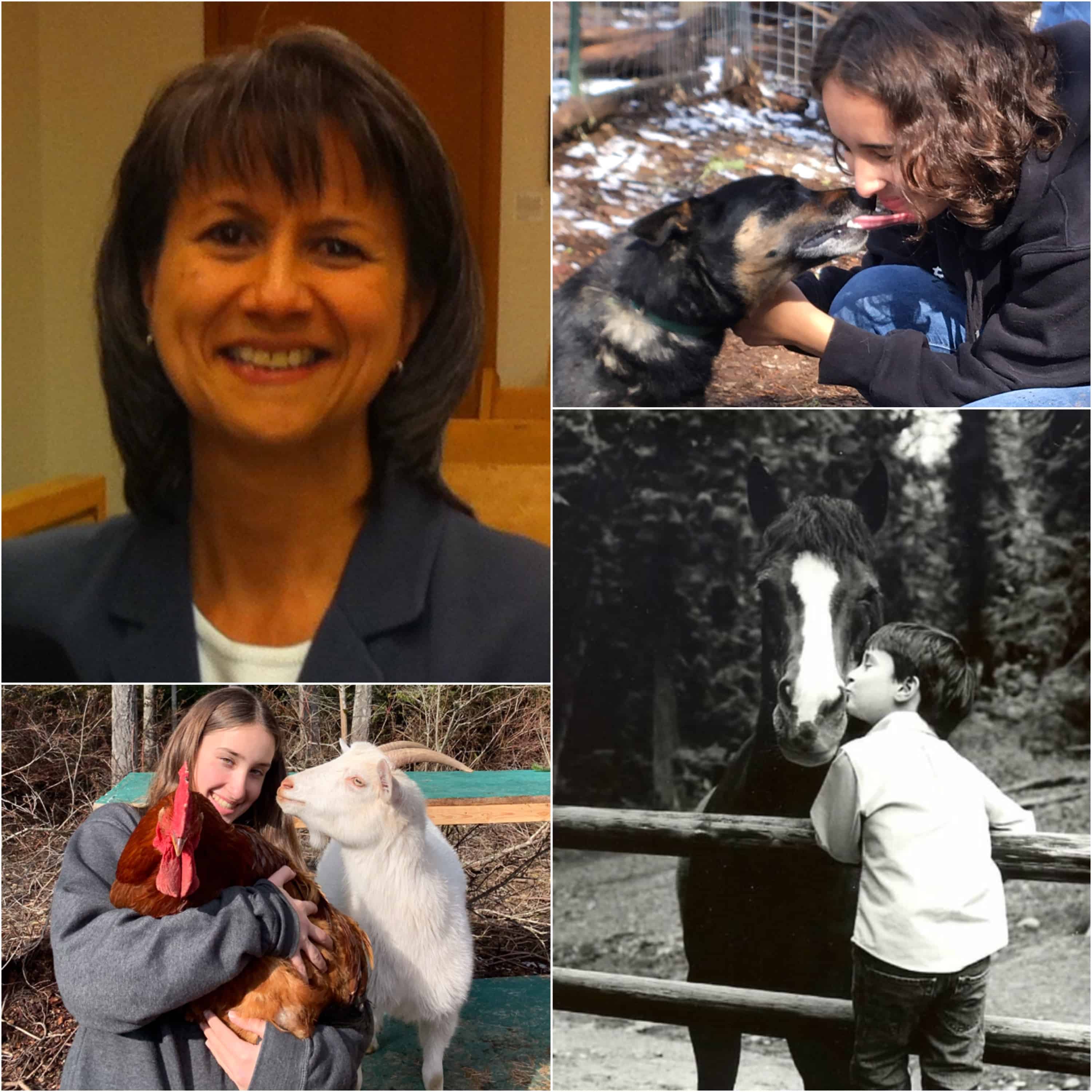 “Born animal lover.”  My parents frequently introduced me that way, then elaborated on how as a toddler I wandered away from a churchyard babysitter and nearly drowned after following three dogs into the ocean.  Or how when I was five and was supposed to be home napping, they instead often found me in a nearby pasture with several carnival-ride ponies.  Or how as young teens, two boys and I spent hours towing Spinner dolphins back into deep water after a pod of roughly 60 beached themselves near my house.  Predictably, I asked for a pony every birthday and Christmas.  I wanted “to be a vet when I grow up.”  And a jockey.  Instead, I went to music school in Los Angeles in the 80s, then college and law school in Seattle in the 90s.  Before then, every summer as a teen, I lived and worked on a Black Angus and Quarter Horse ranch in upcountry Maui.  I was the primary trail-ride guide, I roped cattle, I rode in rodeos.  My favorite childhood experiences include quiet, moonlit rides alone in the mountains on a mare named Candy, and, most thrilling – loping or galloping bareback in the sun on a spunky mare named Pepe, everything around us a blur.  It would take me several decades to realize the extent to which experiences as those involved exploitation and sometimes even abuse of my beloved ranch animals.

I became vegetarian in 2004 after reading Howard Lyman’s “Mad Cowboy,” then vegan in 2011 after watching “Forks Over Knives.”  To this day I marvel over why it took me so long to go vegan because, although my childhood home of Hawaii is paradise in many ways, it is also the land of ubiquitous cockfighting; spearfishing, line fishing and “hukilau” net fishing; and routine backyard slaughter of farm animals to celebrate every conceivable special occasion.  Callousness for animals then was and still is the norm throughout the islands.  Animals are food, nothing more.  Despite my lifelong rejection of that mindset and those practices, I did not make the connection and go vegan until I was 46.

Now that my actions align with my innate compassion, life is a joy.  My spouse is vegan.  Our three kids all chose to become vegan six years ago.  And, after 20 years of using my law and writing degrees conventionally – principally as a civil trial attorney – I resolved at the start of 2019 to use both to benefit animals here forward.  Soon after, I was invited to join Heartwood Haven’s Board of Directors.  Ah, serendipity.  I am grateful for the opportunity to collaborate with so many compassionate people who are committed to such important work. 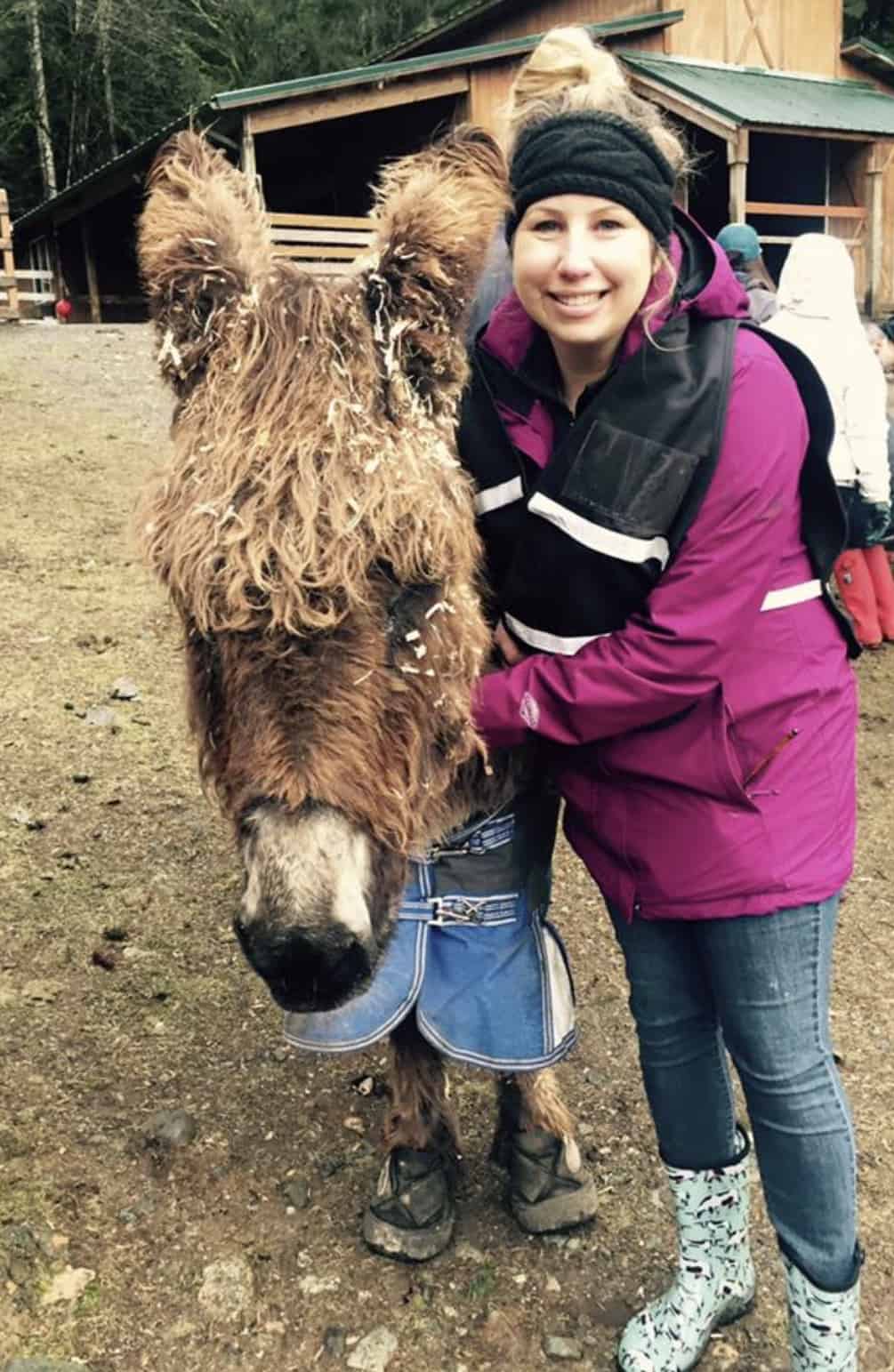 Carrie has a degree in Sociology, and has held positions in law enforcement, investigations, risk mitigation, and the legal industry prior to pursuing her passion in animal welfare. Carrie started her career in humane law enforcement in 2009. She later went on to direct a local animal rescue, implemented several outreach programs promoting spay/neuter efforts, and has helped low-income and the homeless retain their pets. She is currently the program director for a new project aimed to assist the homeless in Seattle with their pets. Carrie lives with her adopted dogs, cat, and rescue fish.