Review time! Spring arrived and the busy winter full of animal intakes and habitat expansions is behind us. Let’s take a look back at what your donation dollars have covered and what lies ahead for the animals of Heartwood Haven.

Our biggest intake of the winter was on December 30th when seven hens and fourteen roosters arrived. The hens spent their lives producing eggs in cramped, filthy conditions. After two years of egg production, they are considered spent and are usually sent to slaughter. These girls were saved from that terrible fate. In order to get ready for the big arrival, Heartwood Haven hosted a week long volunteer event and nearly thirty volunteers helped to clear, move, fence, put up aviary netting, set up, and insulate new chicken homes. All twenty one new intakes received health checks, deworming, were treated for parasites, and then quarantined. After quarantine ended, the roosters were integrated into their new bachelor flocks. The hens received a an outdoor coop and no longer had to be carried inside to sleep and back outside for the day.

Just before Christmas, we fostered three chickens who went to a new home. Soon thereafter, on Katya’s birthday, we caught a stray hen living in the freeway median; this brought up our stray chickens caught to seven for the year. After quarantine was complete for the new hens and roosters, we took in four hens from a local shelter. Our first fundraiser for implanting the seven hens saved from industrial egg laying ended successfully, and all hens received hormonal implants. These implants stop egg production and the health problems associated with laying too many eggs.

Verne and Shirley are the resident goats of Heartwood Haven and early in the winter they received a habitat expansion, tripling their habitat area and possibly quadrupling the size of their playground. With the expansion they also have access to a new grazing area. They use their playground to climb, jump, and sunbathe! For this project, we purchased wrapped wire fencing and t-posts. 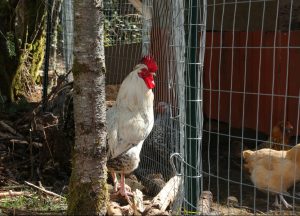 Jon, Arya, Venus, Luna, Belinda, Purdy and Sol moved to a new area next to the former battery hens. Their new habitat was once a mound of dirt and tree debris which volunteers demolished over several weekends. To set up the habitats, we purchased t-posts, 200 feet of 6’ fencing, and aviary netting.

Stanley, Batman, Robin, Vendetta, Tornado, Whistler, Whitney, Joshua, Sequoia, Cranberry, Axel, Monarch, David, and Bowie all reside in what we call our big rooster flock. These boys range between 7-12 lbs, and they received a habitat upgrade to almost 0.5 acre in the forest. For this expansion, we were able to use an existing shed on the property as a coop, reducing new purchases to insulation, 300 feet of 6’ fencing, and t-posts. Their large habitat includes huckleberry bushes, large trees, fallen trees, and stumps that were pulled before we purchased the property. It took a week of help from volunteers to clear blackberry bushes and ferns in order to make their habitat accessible for them.

There are 23 roosters in the small rooster flock. Their sizes range from less than 1 lb to 6 lbs. Being the smaller crew does not mean they are overlooked! They received an additional 800 sq ft of living space to their 2400 sq ft giving them room to spread out and explore, which is much needed as we head into the spring months. 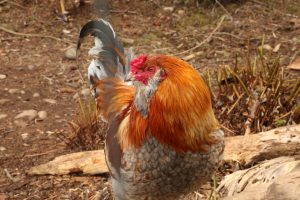 We saved Goose and Maverick just 48 hours before they were going to be euthanized; they were victims of cruelty and illegal cockfighting. These roosters cannot go into bachelor flocks without a long period of rehabilitation, instead we opted to take in game hens for them and set out on another project of clearing blackberries, brush, leftover construction rubble and dirt from a section of the property. Goose and Maverick now have a place to call their own at Heartwood Haven. With the help of over 15 volunteers and over the course of two weekends, we made their dream home a reality. For this project, we purchased fencing, t-posts, and aviary netting to keep them safe. Luckily we were able to find one dog house for free and another for $30 and have converted those into coops for Goose, Ruby Rose, Maverick and Betty.

Not Straw, Sticks, or Bricks

Last but certainly not least we built a pole barn and predator proof home on the property for three little pigs named Wanda, Yoshi, and Koopa. With their barn in place we also needed an outdoor place for them to enjoy the sun and the dirt so we purchased a gate, hog panels, and wooden posts. We setup a temporary outdoor place for them while we work to clear more of the property to expand their area to an acre.

Keep your eyes peeled for our post on plans we have in store for spring. If we only do the things we have planned, which we know is not how it works with an animal rescue, it is still a LOT of stuff. Don’t forget we love hearing from our supporters, and we hope to see many new and returning volunteers in the coming weeks! 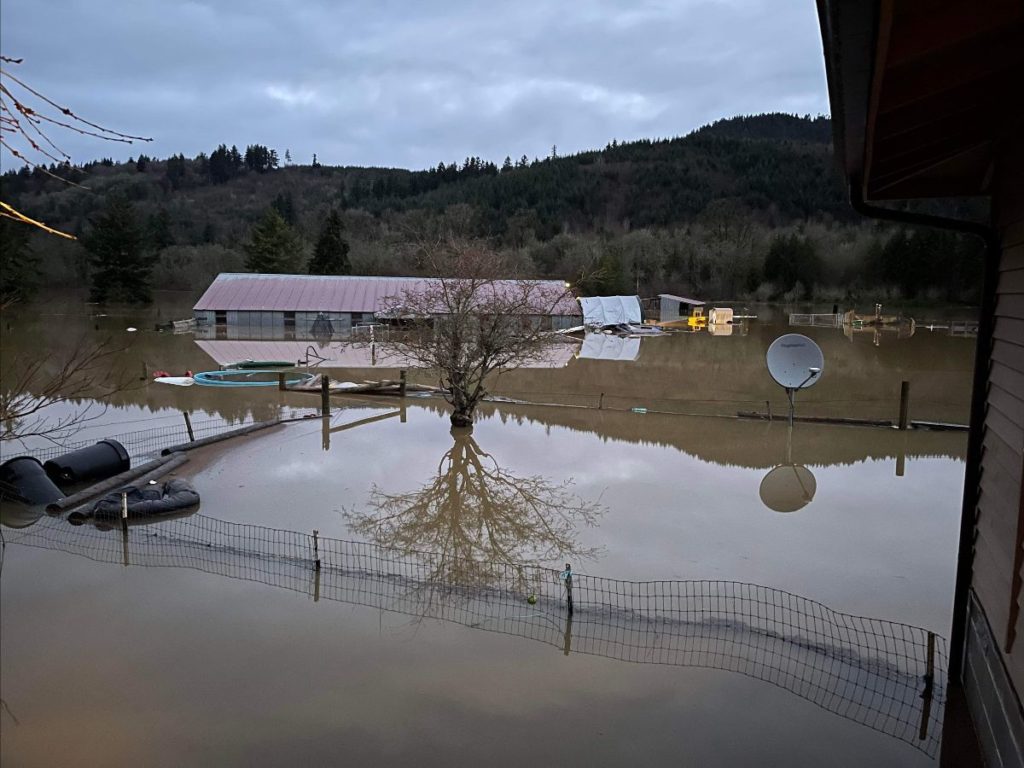